There are so many types of advertisements in the world. There are mobile advertisements that can be found on our devices, advertisements that decorate public transit and other vehicles on the road, and even as we walk through the streets. But the number one image that pops into people’s mind when we talk about advertisements are the digital billboards that populate metropolitan areas–and for very good reasons. These billboards are captivating, dynamic, and in-your-face. In other words, they’re impossible to miss. For these reasons, digital billboard advertising is one of the most effective advertising strategies for a brand to invest in and serve a vital role in differentiating oneself from competitors.

What is Digital Billboard Advertising?

Simply put, digital billboards are electronic images that display several different static advertisements on a rotating basis. These types of billboards can vary in shape and size and are commonly found along highways, entertainment venues, and of course, metropolitan areas.

Though one can argue that the advertising space has to be shared with other advertisers, the impressions that these billboards generate are unbeatable. On a large display placed in an area with high-traffic, all eyes will be on your billboard. Cost should also be a factor that is taken into account when considering a digital billboard advertisement. Though the cost is steeper than other forms of advertisements, the return on this type of investment is unmatched.

Why are digital billboards an option for branding?

Digital billboards are slowly starting to spread everywhere, considering that more and more businesses are starting to choose them as their choice of marketing and branding. However, there is a very good reason behind such a trend: digital billboards work. Not only do digital billboards work effectively in terms of acquiring attention, they also offer a great opportunity for creatively building the brand image of a company or an organization. As opposed to overused and outdated marketing platforms and tactics, with the help of digital billboards, companies can get very creative. For example, a lot of digital billboards have an interactive theme, which means that the billboard interacts with a viewer in a certain way which makes the person feel more ‘in touch’ with the advertisement, creating more customer connection as a result. One of the biggest issues with many of the marketing tactics is that they do not stimulate a customer’s mind enough to create strong connections between people and the brand. This is due to the fact that a lot of billboards produce a rather simplistic advertisement, which, although looks good, does not give a bystander a good enough reason to trust the advertised brand.

The beauty of digital billboards lies in its public visibility, which offers virtually limitless chances for upping the brand exposure of your business, as well as spreading your brand message to the masses all at once. Digital marketing, for example, offers a very target specific advertising which often enough produces great results, however, when a business choose digital billboards as their platform of advertising, they are exposing their brand to a huge pool of potential customers. Another great upside to using digital billboards is that you can choose the location to place your advertising that will be the best fit for your targeted audience. For example, in a lot of malls anywhere throughout the world, we can see digital billboards that represent the brand image of a clothing company. This is a perfect example of matching the target audience of a business with a location which is most likely to convert bypassers to customers.

To add to that, one of the biggest leverages that you get with digital billboards is creativity. Unlike static billboards, which at one point yielded phenomenal results for many companies, digital billboards offer you a platform which displays computerized digital images that change at desired times throughout the day.

What about other forms of marketing?

There are many creative ways to accelerate the growth of your business’s brand image, starting from billboards and TV commercials all the way to digital and social media marketing. However, it also has to be pointed out that marketing in the modern world is oversaturated and as a result of that, the costs associated with business marketing have grown tremendously over the last decade. Even though digital billboards are not necessarily cheap either, they offer a more convenient price for the price conscious business owner. However, the costs associated with digital billboards vary depending on the location of the advertisement. For example, a digital billboard ad in Times Squared, New York, will prove to be an extremely expensive investment, one that not many businesses may be able to afford.

Digital Billboards Advertising Across the Global 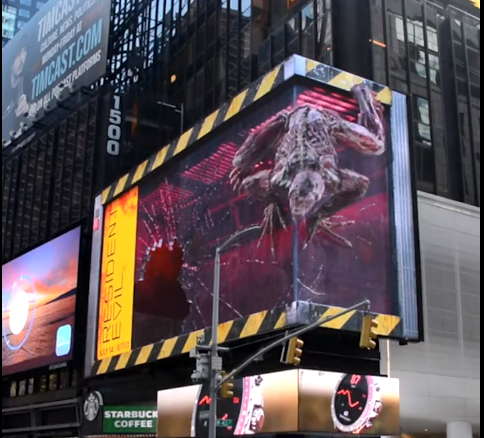 Known for its digital billboard advertising, Times Square is the place to have your advertisement. As it is one of the most iconic advertising locations in the world, this highly populated area is proof that digital billboards are as effective as can be. Thousands of brands compete for an advertising space here, including fashion brands, to food, to entertainment–the list is endless. As the area attracts thousands of tourists and people alike each year, you can be sure that your advertisement will have people talking. One recent example is the Resident Evil advertisement placed in Times Square that has been garnering much attention across social media. Through using 3D effects, a hyperrealistic mutant Licker is pictured breaking out of a glass cage, making it appear as if the subject is bursting out of the digital display. This example and many others prove the fact that you’ll know you’ve made it when you have a billboard in New York.

Another area that is known for its high density of digital billboards is Japan, with a particular emphasis on the Shibuya Crossing. Numerous pedestrians pass by this area each day, whether they’re coming from work, school, or just to peruse the area. Known for its iconic intersection, all vehicles are stopped in every direction for pedestrians to cross. Due to this high-traffic area, some of the biggest names in the industry fight for advertising space, knowing that once pedestrians cross, all eyes within the vicinity are on the digital billboards that light up the area. Additionally, with the country’s hand in technology, some of these billboards even have three-dimensional effects, which truly calls the viewer’s attention.

Within the downtown core, you’ll find numerous digital billboards that light up the streets of Toronto. However, one of the most notable areas for digital billboard advertising is Yonge-Dundas square. Similar to Times Square, Yonge-Dundas is a densely-populated area and also a known tourist attraction, with people coming from far and wide. Located right outside of the Eaton Center, hundreds of people pass by this area each day and see the various billboards that decorate the surrounding buildings. Whether it is placed right above the Cineplex Theatre or the Eaton Centre, you can bet that this area is a hot spot for brands to make a big impact on people passing by the area.

Known as one of the best billboard locations in the world, Piccadilly Circus is no stranger to digital billboard advertising. With approximately two million people passing by the mosaic of billboards each week, the tourist attraction is a prime spot for brands to place their advertisement. There are even built-in cameras within the screen that can track the cars and individuals passing by to deliver tailored advertisements to the right people, at the right place and right time. The effects of the digital billboards in this area are so powerful that there are claims that the advertisements brighten both the London area and economy.