The Most Controversial OOH Advertisements 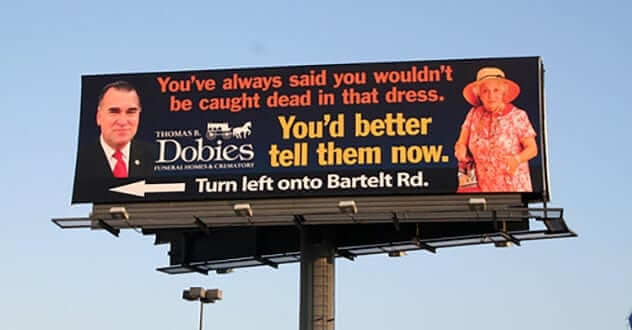 The advertising industry is known for using creativity, innovation, and that ‘shock’ factor to captivate consumers into buying a product or service. Because of this, many advertisements can be seen as controversial. It seems that sometimes ads can spark more interest in an audience while other times they can be so controversial that the company receives backlash from viewers. The Out-of-Home advertising (OOH) medium has definitely  had some very controversial ads over the years, whether they were truck-side ads, billboards, or digital. Oftentimes these ads even go viral and that’s why many companies  create controversial ads on purpose, in the hopes of getting more viewers. This article will assess some examples of such ads and discuss why they may or may not have worked for building brand awareness and engagement.

Perhaps the most controversial ad of this year, and one that received many negative reviews, was a billboard promoting two real estate agents by REMAX. This billboard was placed in Toronto, showcasing two real estate agents doing karate chop moves with a crossed-out COVID sign that was written in an Asian-style font. The advertisement was seen as racist and distasteful as it showed two Caucasian men doing karate poses. People on social media shared this viral billboard many times, calling it offensive and unnecessary. Passersby complained about how there could have been many other ways to advertise and this was just poorly developed. Shortly after the billboard was erected, REMAX came out with a statement saying that, “The messaging in the advertisement directly conflicts with our values and belief in equality, inclusiveness and access to homeownership for all. As part of a global franchise brand, our next step will be to alert the franchise owner with whom these agents work to address this as soon as possible.” This OOH billboard ad was the perfect example of a controversial ad gone wrong, receiving backlash from viewers and therefore having to be taken down.

PETA ‘Save the Whales’

Another shockingly controversial billboard ad was created by PETA in Jacksonville, Florida. PETA is known for fighting for animal rights against animal cruelty and, in this case, they were trying to get that message across by asking viewers to go vegetarian. The slogan read, “Save the Whales. Lose the Blubber: Go Vegetarian”, which normally would be a positive statement as the organization was encouraging people to stop eating meat. However, what made the ad so controversial was the image beside the text, which showcased an overweight woman in a bikini. Unfortunately, the billboard ad seemed to suggest that obesity is directly related to eating meat and that by going vegetarian you will instantly become thin. The shock factor of this ad had a negative impact on viewers because instead of promoting social activism, in the statement about saving the whales, the ad promoted a vegetarian lifestyle and bashed anyone who eats meat, calling them obese and unhealthy. The billboard was seen as an insult to many, perhaps the worst part was that many people interpreted the ad as calling overweight women ‘whales’ and shaming their bodies for not going vegetarian. This was yet another example of a controversial advertisement gone wrong, creating backlash and negative reviews for the organization.

A unique billboard ad was created by Robbins Diamonds, a jewelry company specializing in engagement and wedding rings. What made the ad controversial was the fact that it showcased a woman holding up her ring finger as if it were her middle finger, creating a crude and bold image. At first glance, passersby would definitely mistake her ring finger to be her middle finger as the way she’s pointing it with a stern look on her face makes it seem so. The slogan, ‘She’s tired of waiting,’ further demonstrates the woman’s impatience and annoyance towards the situation. As people drove by the billboard the illusion of the woman holding up her middle finger instantly caught their attention, however, as they approached the ad, it became evident that it was an optical illusion and the finger was actually her ring finger. The billboard itself was very innovative and creative, captivating its audience without creating any offense. This OOH ad was controversial in its unique approach to humoring passersby without facing any negative consequences. This billboard was very relatable to women that were waiting for an engagement ring and therefore having such consumers drive by the ad significantly boosted brand awareness for the company.

Another controversial billboard advertisement was created by the funeral services company, Bergemann & Son Funeral Services. This billboard was placed in a Berlin subway across from the platform with the message, ‘Come a Little Closer’. At first the OOH ad may not make too much sense but once you see that the company responsible for this billboard was a funeral services business, it becomes evident that they were trying to use dark humor to build brand awareness. This ad was very controversial as many do not take death lightly; especially when the ad is telling passersby that if they were to come closer and get hit by the subway then they would be using their funeral services, can definitely seem tasteless. Although some viewers would definitely appreciate the amusing dark humor approach to this ad, others would see it as crude; therefore, in this case, it’s a matter of targeting the right audience by taking in account the demographics of the people passing by. Perhaps this would be better suited for a younger audience and for people who find dark comedy amusing.

A billboard ad created for the People’s Party of Canada was seen as distasteful and racist by many viewers. Political advertisements are often controversial because people can be very opinionated when it comes to choosing a party to support. The billboard showcased party leader Maxime Bernier with the message, ‘Say NO to Mass Immigration’, causing many to criticize the ad since it seemed to be promoting anti-immigration and containing racist undertones which many thought was offensive and distasteful. The OOH advertisement became such a controversial topic and received so much criticism and negative feedback that the owner of the billboard had to take it down shortly after. Although the ad did not actually violate any rules, it became apparent that the company that put up the billboard would face too much backlash to keep the billboard on display. The company president, Randy Otto, later released a statement saying that, “It was never my or Pattison Outdoor’s intention to offend, alienate or in any way insult the public by allowing this ad to be run,”. This example showcased how important it is to keep your audience in mind when creating advertisements.

A billboard with a strong message against speeding in harsh weather conditions has created controversy among viewers. This ad campaign was created by the government in New Zealand to raise awareness after realizing how many accidents were occurring on the roads due to poor weather and speeding in these harsh conditions. The billboard was very innovative as it changed based on the weather. When the sky was clear, the billboard showcased the face of a young boy with the message, “Rain changes everything. Please drive to the conditions.”, however, when it was raining, the billboard changed to show blood streaming out of the boys’ eyes and nose. The shockingly gruesome image definitely had a major effect on drivers passing by the billboard, creating awareness and encouraging them to slow down during harsh weather conditions. Perhaps the best part of this OOH ad was the creativity and innovation used by changing the image based on weather conditions. This is the perfect example of a controversial billboard ad done right as the intended shock factor allowed passersby to be more aware, safe, and cautious of their driving.

It appears that creating a controversial OOH advertisement can have its pros and cons. It’s really important to take into account the audience you’re targeting; their demographics such as age and location could play a huge role in the reaction your advertisement will receive. By creating a controversial ad that will likely be viral and shared over and over again on social media, it definitely becomes a risk versus reward marketing strategy. Will your next ad be controversial?