Tech brands use billboards as their preferred channel of advertising when they need to reach a diverse audience. They also see billboards as an ideal medium to increase their brand awareness. App companies saw increased downloads and organic searches of their apps because of successful outdoor campaigns. Some of the big names in the technology sector, such as Twitter, Google, Instagram, Doordash, and many more, have used creative outdoor advertising and obtained intended results. One of the biggest obstacles that traditional billboard ads face, is the inability to track conversions, especially when a company decides on a hybrid campaign. By using innovative technologies, agencies can track the number of impressions made by billboards and use mobile retargeting to reach potential customers who come into contact with the ads. Below are some outdoor advertising campaigns run by popular tech companies.

Twitter, a popular social media platform with over 330 million users in 2020, used mobile billboard advertising across South Florida to run an awareness campaign encouraging people to wear masks amid the pandemic. The billboards were strategically placed in high-profile spots, highlighting  45 chosen tweets, one of them being“Think of the mask as a bikini for the face”. The billboards that carried messages, urging people to wear masks were placed in crowded spots in Miami, such as at the beach, to encourage visitors to participate in preventing the spread of the virus. Twitter plans to expand this campaign to other cities, including Seattle, Jersey City, New York City, and Los Angeles. City authorities are in talks with Twitter to spread awareness about wearing masks in public spaces, as the US is one of the worst-hit countries by the novel Coronavirus. 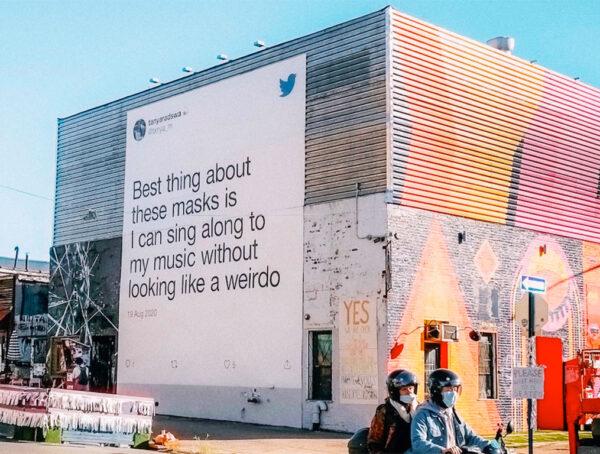 In 2019, Google launched “Make the Most of Summer”, a digital out-of-home campaign providing information and suggestions to people to help them enjoy their summer. Several digital billboards were erected, showcasing the results of popular summer search terms such as, “Parks near me” or, “How to build a slip and slide”. The campaign ran across the city of London, Manchester, and Birmingham. Along with providing general information on search results, it included creative map directions concerning the weather conditions and time of day. 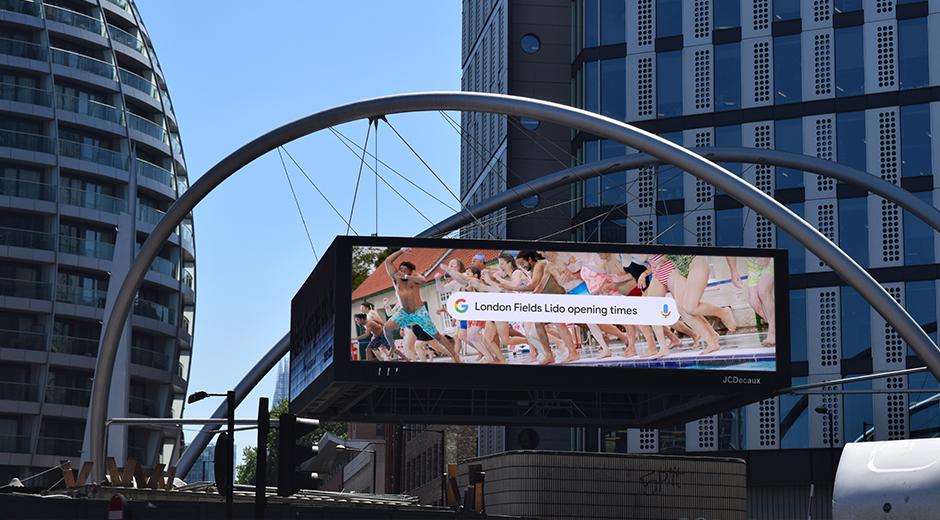 In another marketing campaign, Google partnered with The Hallway, a creative ad agency, to run an outdoor campaign, erecting digital billboards across London,  UK to promote Google Search. The digital billboards provided information to pedestrians and commuters about daily weather, information about the closest landmarks, and suggested restaurants and theatres using artificial intelligence and machine learning techniques. These billboard ads engaged with customers by providing customized information using the Google search engine. For instance, if the weather is getting colder, the billboards suggest indoor activities.

Instagram, the second social media platform on our list, launched its first outdoor advertising campaign in France. The idea was to install digital billboards all over France, displaying images and videos posted by the French Instagram community. The core objective was to promote Instagram among teenagers in the country after Instagram faced increasing competition from its rival company Snapchat. With the significant investment made in this campaign, Instagram joined other tech giants in relying on traditional billboard advertisements to promote and increase their brand awareness among potential audiences. 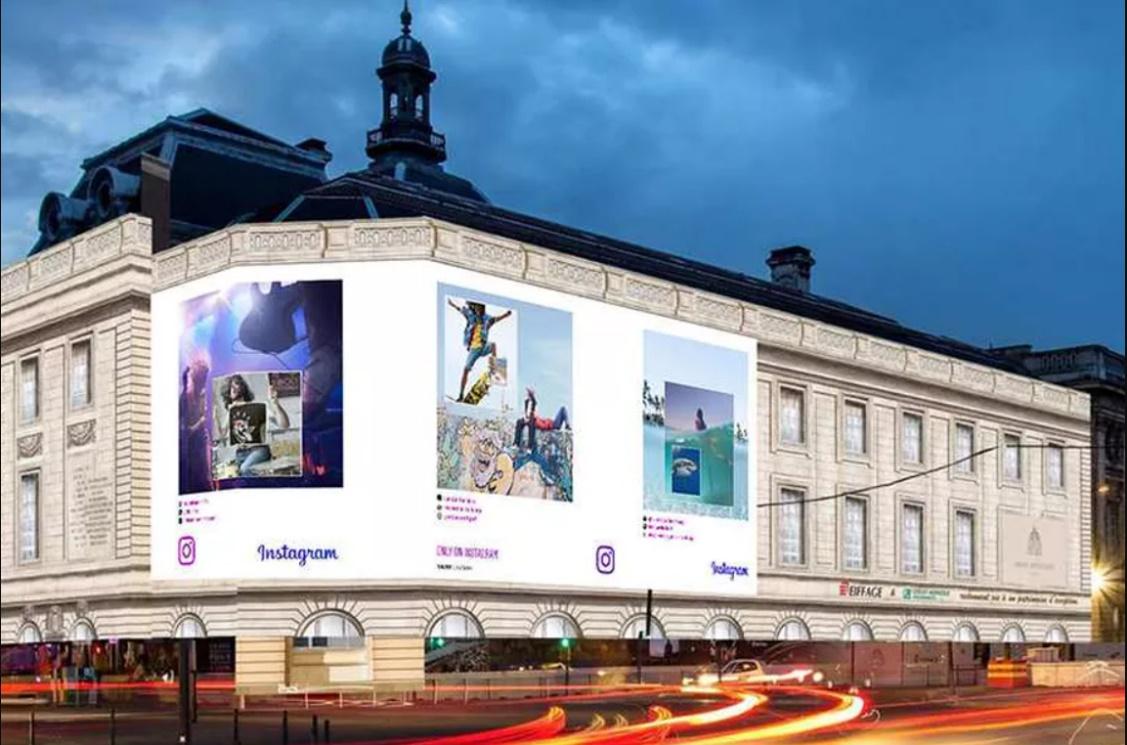 Amazon decided to set up a creative digital billboard to promote its new series, ‘Good Omens’, which was released exclusively on Prime Video – an amazon video streaming platform for its prime customers. The digital billboard was set up on the streets of New York City. The billboard used live camera feed mirrors, making its audience appear on the digital screen while a doomsday scenario unraveled around them, including UFOs, Kraken tentacles, and giant fish raining down. The billboard gave passersby an exclusive experience of being a part of the advertisement and showing them on a big screen. The campaign turned out to be a huge success using creative outdoor advertising. 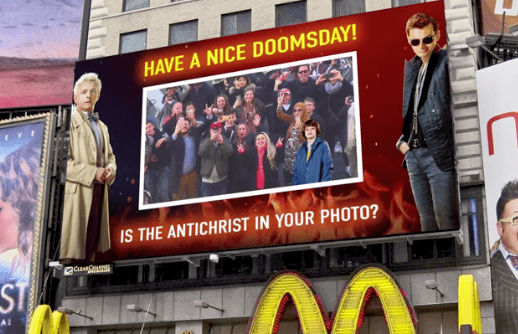 Bumble started as an online dating service application and has made quite a reputation by creating innovative billboard advertisements for their company. One such innovative billboard advertising campaign was launched when Bumble added the feature Bumble Bizz to their application. The new feature helped like-minded professionals connect, for example, those who are looking for a mentor. Bumble came up with bold yet simple and elegant headlines. For instance, headlines such as, “Connect with people who think you’re very talented”, “Career advancements without the unwanted advances”, and many more. These billboard ads quickly gained attention from their audience.

The second advertising campaign that Bumble ran was to spread awareness about the pressures faced by women to marry a particular type of man. Bumble set up the billboards with the headline, “Be the CEO your parents always wanted you to marry”. The goal of this campaign was to empower and encourage women to make their choices in marriage, not to give into social norms when finding their soulmate, and to change their mindset when it comes to dating 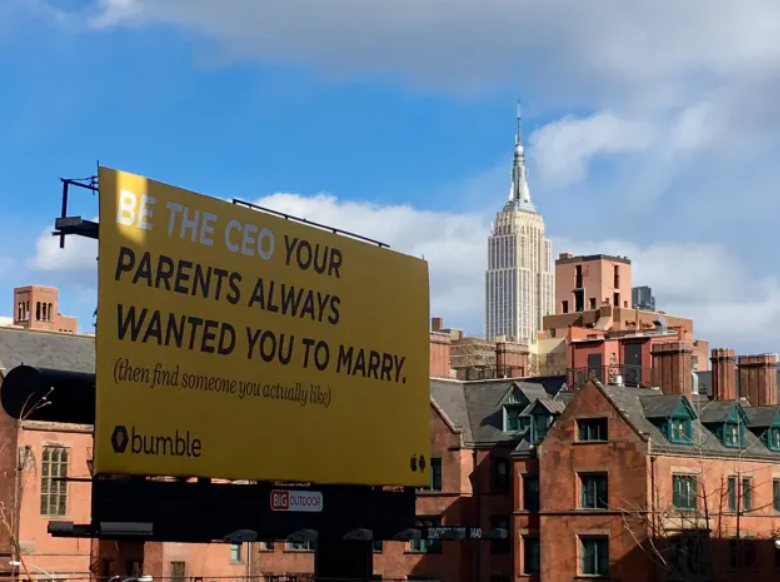 Doordash, an American on-demand prepared food delivery service app, partnered with Miami Ad School in running their, “Eat like nobody’s watching” campaign. The campaign’s goal was to erect traditional billboards in different areas of the city with a simple message urging people to order food from home instead of dining in at a restaurant. Doordash came up with eye-catching slogans such as, “Home is where there’s never a wait for a table”, “Home is where dessert is dinner”, and similar headlines encouraging users to have restaurant items delivered to their place where they can eat with no judgments.

Even with rapid development in digital marketing and advertising, where it is much more convenient to capture data and analyze the impacts of ad campaigns, billboard advertisements are still one of the favorite channels, even for tech companies, in reaching out to mass audiences and increasing their company’s brand awareness