Out of Home Advertising and Realtors

Real-estate firms and agents have way more challenges and obstacles when they try to create brand awareness with their customers compared to other industries. For starters, their target segment is very specific and most of the time it’s contained to a particular geographic area, which reduces their customer base significantly. Additionally, the proportion of millennials growing in their target market makes it even more difficult to engage with, and convince them, to buy a property than baby boomers. With the tremendous growth in digital marketing in the last decade, key players in almost every field started using this medium to reach out to their potential customers. However, in the housing market, the traditional forms of advertisement, such as billboards, tend to influence the audience the most in order to engage with real-estate firms.

One of Clario’s recent articles states that, on average, a person sees 5000 ads per day and a huge portion of this number is contributed by online ads and television. The time that an ad gets displayed through digital channels – even using digital billboards – is way less than online and  television ads, and is constantly changing. This makes it extremely difficult for an audience to engage with your ad, and even when an ad is engaging, the chances of consumers acting on it (CTA) is rather low. Moreover, the engagement level of social media advertising is between 0.5% to 0.99%, which is extremely low. The fewer numbers in engagement  reflect  brand awareness of a company using social media marketing as their primary channel of marketing.

How Billboards can help

Unlike digital advertisements, standard billboards are dedicated  to a specific ad campaign. Thereby, the interaction time of potential customers with the billboards are significantly higher. An article from 75Media, a company based in the UK, states that billboards have an engagement rate of 16%. The article further indicates that companies that have billboard advertising in their integrated marketing campaign can increase their social media outreach by up to 212%, and their mobile engagement by as much as 316%.

According to a global study by Nielsen, 56% of Millennials trust billboard messaging, whereas they trust online videos  46%, and subscriptions to messaging featured on paid advertisements only 48%. With realtors only having a specific segment of a population located in a specific geographic area, placing billboards strategically in that location can aid them in promoting their organization and creating brand awareness among potential customers. There were roughly 120,000 real estate agents in Canada spending around $625 million on advertising last year, whereas in the US, 1.9 million agents spent roughly $13.5 billion on advertising.

The strategy used by realtors to create good advertising is exceptional. They want their faces to be on almost all advertising channels they use, whether that’s  business cards, billboards, newspaper ads, and lawn signs. They follow this methodology to subconsciously register themselves as a brand when their target audience sees them. Since buying a house is a lifetime event for most people, they consider and reconsider their options repeatedly before they make a final decision. By having their faces on billboards, real estate agents are trying to gain the trust of their customers. Another common design element most realtors include is their contact information, such as their email address and mobile phone, which is then displayed on billboards with big, bold letters to make it easier for viewers to contact them.

Creativity and Timing of billboards 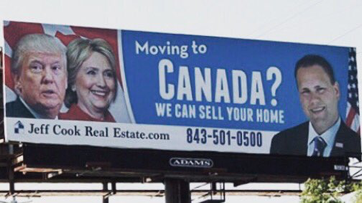 Next to location, the timing of billboards are important. Jeff Cook, a realtor based in South Carolina came up with a creative idea to put on his billboard – a caption that stated, “Moving to Canada? We can sell your home,” after the 2016 U.S. Presidential election. The billboard became an internet sensation and had a skyrocketing engagement rate with its audience. Jeff Cook received around  380 business phone calls per day after his advertisement went viral.

Gary Schmidt, a North Idaho realtor came up with an idea to add a face mask to his billboard on Highway 41, as he attempted to reach customers while spreading awareness to people about wearing a mask during the pandemic. His billboard gained popularity among drivers and was featured in local newspapers and tv channels, thereby reaching a greater number of audiences through his innovative and perfectly timed billboard.

The details provided in billboards such as a contact number, website address, email, and office address should be clear and concise. The use of too many points of contact or call to action will lead to confusion for your audience. Additionally, it’s preferred that realtors don’t use more than seven words on billboards as it will be easier for the audience to read the content. Also, information details that are shared should be bold and visible concerning the color contrast chosen for the rest of the design for better readability among audiences of all age groups.

The location and timing of billboards should be planned strategically to yield greater results, for example, reaching more audiences with minimal budgeting, as well as making your advertising both effective and efficient.

Going right with the numbers

“The more the merrier” is not always suitable for marketing. It’s good to spend a significant amount of money on advertising but overdoing it may result in negative publicity. For instance, Kris Lindahl, an advertiser, aspiring motivational speaker, and vlogger who has about 600 billboards was all over social media recently. Many people online responded to Kris’ posts with the hashtag: #krislindalmustbestopped because so many people were annoyed about seeing his billboards everywhere, all the time. It is good to have the audience recognize your brand but in this case it, became counter-productive. Hence, it’s vital to plan the number of billboards that will be put up, ensuring that you’re not overwhelming your audience.

The traditional billboard is still an irreplaceable advertising medium for realtors to get  their message out there and to make their brands registered among their core audience groups. With several case studies supporting this hypothesis, realtors should emphasize on designing and placing billboards in targeted areas in order to give them an edge over their competitors.