How much does it cost to own a billboard in Ontario? 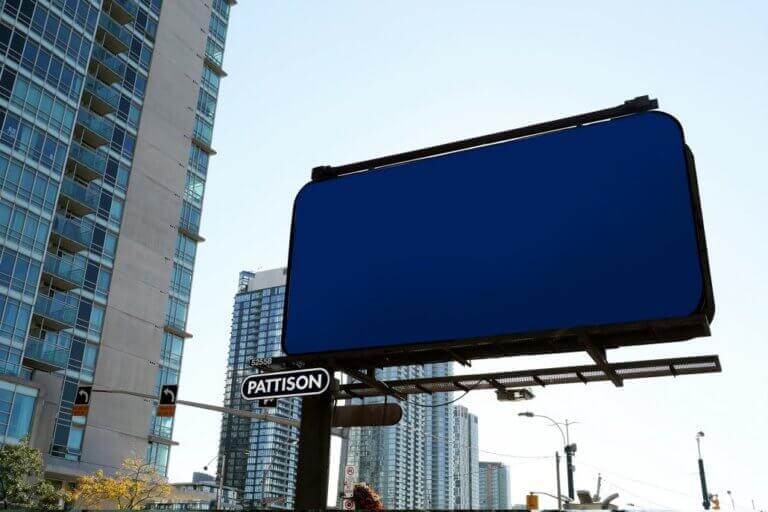 In Toronto, there are various OOH advertisements all across the city. Rural areas and the downtown core experiment with billboard advertising geared to different target audiences. These days, it’s hard to walk, drive or take public transit anywhere without seeing any advertising. Having outdoor advertisements in heavy traffic areas will create more awareness about your product or service you are trying to advertise. They have been proven to be effective for building brand recognition. The prices for billboards vary and are dependent on a number of factors such as location, size, duration, and so on. Let’s dive into the billboard culture in Ontario.

Lamar Advertising, IMA Outdoor, and Stellar Outdoor are all billboard advertising companies that are available in the Ontario region, and offer premium services that will resonate with this Canadian market. But, unique to Canada and popular in Ontario, a company called PATTISON Outdoor offers classic poster, large format, and street-level advertising that targets the everyday Canadian resident. They hold 55% of Canada’s total static poster inventory and are the exclusive supplier for Vertical Posters in Vancouver, Edmonton, Calgary, and Winnipeg. PATTISON does billboard formatting horizontally and vertically, covers wall murals, superboards, and everything transit, including bus bench advertising. In Ontario, PATTISON covers billboard advertising for the TTC, GTA Transit Authorities, the PATH, Gardiner Boards, classic and digital posters, as well as downtown digital networks which include office towers and residential buildings. They also place billboards in the Hamilton and Southwestern Ontario regions, and Ottawa. Their Ontario markets for billboard advertising exceed 135 places, so their clientele is expansive and committed. What are the Rates?

The rates are all based on an average scale but, typically, the lowest amount you can spend is anywhere from $300-$800 on a ‘Junior poster’, which is a small billboard that can be around 11’ wide and 5’ high. Anything bigger could cost you anywhere from $900-$5,000. The sizes can range from 22’-50’ wide and 11’-15’ high. Prices will definitely increase or decrease depending on the location of the billboard. Usually, the closer you are to the city the higher the cost. So say you’re a business in Guelph, Ontario, your billboard pricing will most likely be lower than that of the downtown Toronto core. These prices also vary due to how long of a period your billboard will be up for. Usually, they are up for a 4-6-week time frame. Digital billboards cost a little bit more and range from $2,500-$8,000 per ad. One of the positives to this is that there is no production cost with a digital billboard. Also, if any changes need to be made to the ad it can be done in minutes. More ads can translate to digital billboards because they usually change every 10 seconds for maximum exposure. Sometimes, there are also daily and weekly rates available. A lot of the billboard advertising companies can offer you quotes and the best available spots for your ad to get the most recognition.

Advertising on the TTC:

The TTC is one of the largest platforms for billboard advertising in Ontario, and PATTISON does a lot of work to help get those advertisements to you when commuting. Along with its subsidiary, PATTISON Onestop, which does the video content on the TTC TV screens, PATTISON and the TTC have a $324 million contact to continue to produce advertisements for commuters. The cost of king posters, which are placed on either side of outdoor moving TTC vehicles, will run around $550 net rate spot buy for 4 weeks in the Toronto core. For streetcar-only advertising, a king poster will be around $1500 net rate spot buy for 4 weeks. To put it simply, a poster on the side of a streetcar will set you back approx. $1250/month. In terms of murals and door decals, PATTISON uses a rate of $18,000 for portraits on streetcars as a 12 week net rate per mural, while door decals on the subway will cost $10,000 for a 4 week net rate per vehicle. Vinyl decals are primarily used on subway doors, and at one rate for 4 weeks it will add up the cost of around $10,000. Standard (35′ long) and super (70′ long) interior cards are also offered by PATTISON, which are posters placed above the windows on buses and streetcars. Superbus and supertrain advertising is the most profitable form of billboard advertising on the TTC, where they cover transit vehicles on either side, in the back and on the roof, plus on all the interior cards of buses. For full superbus/supertrain coverage, PATTISON rates will be $45,000 for subways on a 12 week net rate per vehicle. All in all, advertising on the TTC is not cheap but very effective in grabbing the attention of commuters in Ontario. Hamilton is a booming city in Ontario that has been steady gaining buzz because of its more affordable housing, food industries, and overall livability. It’s no surprise that Hamilton, given a population of 725,300 people age 5+, is the eighth largest CMA in Canada. This CMA includes the city of Hamilton, Burlington, and other communities such as Stoney Creek and Ancaster. Only a one hour commute to Toronto, Hamilton shares the values and city life that the downtown Toronto core has to offer consumers. Nicknamed Canada’s “Steel Town”, Hamilton has a strong manufacturing industry but also raves about their growing health sciences & service sectors. OUTFRONT Media covers most of the billboard advertising in Hamilton. They have the largest total inventory of Outdoor faces in the Hamilton market and they offer a variety of products which include: posters (10′ by 20′), transit shelters, superboards, and permanents. The rates of billboard advertising in Hamilton are not easy to calculate or estimate, as it is dependent on booking appointments with one of their billboard service providers. It is fair to say they’re less expensive than those of the TTC. It is evident that the advertising industry in Hamilton will continue to expand because of its Toronto-like communities and further development plans. The population rate in Ontario is a lot higher compared to other provinces in Canada. A lot of major companies will set up their billboards in major cities because that’s where they will get the most views and impressions. Many people in the city will be commuting to and from work and will be seeing these advertisements on a daily basis. Billboards across the city have been proven to be effective, with results reaching upwards of 9.5 million impressions per week. Many companies will spend the necessary money in order to get consumers aware about their newest products and services that are available to them. These impressions are important to these companies because it shows what areas the billboards tend to do very well in, and where the most impressions are coming in from. After figuring out the best location for their billboards, businesses can then decide if they want to advertise in that specific area again. There may be some areas in the city that perform better than certain rural areas. This could be due to the fact that there are more people passing by the billboard in the city compared to rural areas. City billboards, and at the side of freeways and highways, tend to get a lot more traffic compared to other rural areas.