The Evolution of OOH Advertising – Why the Legacy Lives On 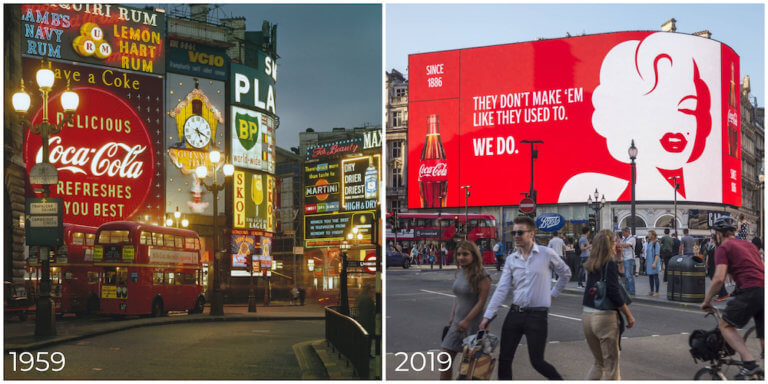 Ever wonder how billboards first emerged? Take Times Square for example, the vibrant colors and lights from billboards illuminate the street corners and are now its trademark. But what is the history behind these billboards? In today’s world, Out-of-Home (OOH) advertising is not only confined to billboards, it consists of a mix of billboards, digital displays, transit ads, street furniture, cinema, place based media, and mobile vehicles such as truck-side ads. OOH is now more powerful and relevant than ever, mainly because of its ability to surround and immerse consumers during the 70% of the day they spend away from their homes. In an age when media fragmentation is increasing due to the abundant amount of advertising mediums available, OOH remains the ideal option to reach people no matter how they consume their media. It is the only medium that can stop people in their tracks, compel them to take notice, and ultimately, buy products. No other advertising presentation is more ubiquitous and more creatively accommodating to our ever-changing society. With such a powerful form of advertising, we can’t help but wonder how it was first introduced and why its legacy continues to live on. In this article, we will take a trip down memory lane and explore the history of OOH and how it has evolved along the way.

The History of OOH

Why OOH Continues to Thrive

As the world becomes more digitally connected, DOOH is also adapting to the increase in socially connected consumers. New technological advancements are on the rise and constantly evolving in order to engage and excite consumers to not only view an ad but to experience it. By integrating DOOH into a campaign and applying new trends such as programmatic ads and mobile integration, concepts like facial recognition and augmented reality are now achievable. Aside from the advancements offered by DOOH, traditional OOH has also made strides with its measurable tracking ability and unimaginable creativity that never fails to impress its audience. It’s no wonder OOH is the only traditional advertising format to experience consistent growth globally over the last decade with no signs of backing down. Let’s take a look at a brand who played a major role in the evolution of OOH and how they transformed along the way while maintaining their original branding image.

Coca-Cola was one of the first to embrace OOH advertising back in 1886. A milestone for Coca-Cola within the OOH industry, is how they maintained possession of the Piccadilly Circus Lights in London for 50 years. The site is one of the most coveted OOH spots and is believed to be the added extraordinary quality of Coca-Cola, as said by Advertising Director Delony Sledge in 1959.

‘Coca-Cola girls’ were all the rage through the 1890s to the 1960s. During this time, illustrations of women in bathing suits and service women from World War I and II were the highlight of the OOH ads. Coca-Cola girls were always portrayed as beautiful, healthy, and happy young women.

From illustrated poster ads to digital and interactive OOH, Coca-Cola has come a long way. To showcase their history and dedication to the medium, they created an OOH campaign to celebrate the coke bottle’s 100th year. The ‘Kissed By’ OOH campaign featured images of iconic stars such as Marilyn Monroe, Elvis Presley, and Ray Charles being ‘kissed’ by the Coca-Cola bottle with the phrase, “I’ve Kissed Marilyn” for the Marilyn Monroe billboard. Who better to represent Coca-Cola as the legendary brand that it is, than the legends themselves!

The most recent OOH campaign from Coca-Cola truly showcases that when a brand is as well-known and established as they are, sometimes a creative and minimalistic approach is all you need.

The ad uses nothing but the iconic red and white colors, the logo, and the words “Feel It” to create an optical illusion of the infamous bottle. The campaign was created by Publicis Italy and is located in the Central and Eastern European markets. Being one of the most recognizable logos in the world, our brains can immediately picture the bottle in our minds and ultimately crave it.

As history has proven, OOH has stood the test of time with its constant innovation and adaptability to our ever-changing society. The key takeaways from Coca-Cola’s success is their consistent use of OOH advertisements. From its first sign in Piccadilly nearly a century ago, to being one of the world’s most recognized brands today, it distinctively demonstrates how investing in OOH can build a brand for the long run. For a time when the technology to target specific audiences and create intuitive ads did not exist yet, OOH was able to take a soft drink like Coca-Cola and transform it into the iconic paramount brand it is today. With the new technology OOH holds, we can only imagine what brands will be able to accomplish in the years to come.