8 Great Billboard Truck Campaigns and Why they Work In recent years, there has been a major transition from static and stationary billboards to a mobile centric wave of new out-of-home (OOH) advertising, but while the older methods are still around and will continue to succeed such as classic billboards, companies are now starting to innovate with their new advertising campaigns. As effective as static billboards are, they can add up in advertising costs and the scope of their impact is limited by their poor visibility in crowded areas. Frankly, there’s no guarantee that people passing by will look up from their phones to glance at your ads — no matter how eye-catching they are.

One of the biggest drivers for this transition is the success that comes with mobile billboard advertisements. It has become an option that effortlessly blends the appeal of large-scale billboard design with a level of mobility and versatility that other methods can only dream of.

As a result there have been plenty of examples of brands and companies utilizing this form of advertising to create eye-popping and creative displays for the public. We have gathered six of the most unique and creative billboard truck campaigns that we think really accomplished what the brand was going for. Let us know if you agree in the comments below.

If you are looking to purchase a billboard truck as well, make sure to contact Movia to set up an appointment with one of our mobile billboard specialists today!

Johnson and Starr is an Austin based company which helps Texas home and business owners with loans to help pay off high or past-due property taxes. To gain awareness for their brand and drive online leads and demand, they contracted 3 Movia trucks, which drove their ads around Houston for 12 weeks targeting high-traffic parts of the city as well as residential streets, looking for property owners who could be interested in their services.

In total, 14.6 million impressions were delivered around Houston with their catchy Cowboy silhouette. The results were truly outstanding with post-campaign Google 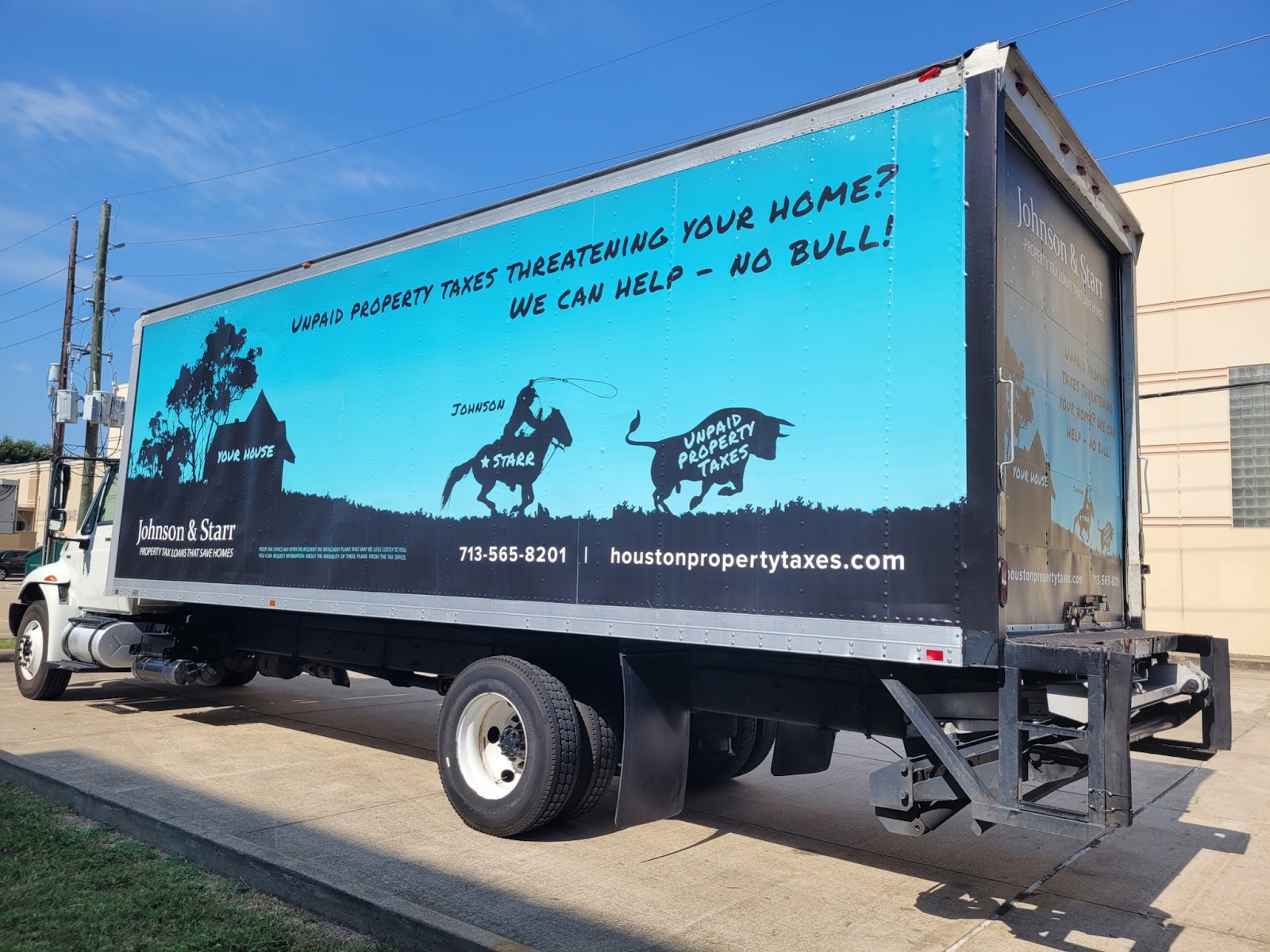 According to a DataBox survey, most website owners have a 3-5% CTR while only less than 5% of respondents on the same survey found that they have high organic click through rates (16%-21% and higher).While real estate companies have been found to have a higher search rate than other markets in 2022, the average CTR for these sites are only at 8.55%

For Johnson and Starr however, their increase of 130% by the end of their 12 week campaign is unheard of and would have only been produced using the help of Mobile Billboard Truck advertising.

In 2017, Canada celebrated its 150th year of Independence as there were celebrations across the country, including this large parade in Port Credit, Ontario.

Wild On Media’s Mobile truck utilized 3 high resolution screens, two side screens at 16 ft by 6 ½ ft as well as one rear screen at 6 ½ ft by 6 ½ feet, as they were able to display sponsor messages  on the rear screen while displaying a live camera feed on the side screens of the stage performances and was capable to switch to sponsor ads being displayed on all screens when there were on stage performances. This allowed the audience positioned further from the stage to enjoy the performances. Having two side screens facing in different directions, the digital truck was able to be positioned in the middle of the field, thus allowing people from both sides of the park area that were further from the stage to see performers up close. Having a Rear screen, also provided sponsor ads to be displayed continuously, before, after and during the stage performances.

Port Credit BIA was also able to utilize the Digital Truck as a dynamic float in the parade,  bringing attention to their ads as well as to sponsor ads with its vivid led screens and attention getting audio.

On top of stellar visuals and audio the Digital Truck was equipped with Bluetooth & Wi-Fi technology that was able to count the number of Smartphones within a 300 ft. radius therefore able to arrive at an accurate count of potential Gross impressions generated from the campaign as well as being able to push a graphic message to people’s cell phones.

WHO AND UNITED NATIONS-COVID 19 COLLABORATION

The World Health Organization alongside the United Nations created a health and safety awareness campaign to inform viewers and create awareness about ways to stay healthy during the pandemic. The campaign ran its messaging on OOH and online digital display media across the United States, Canada, Mexico, Brazil, Argentina, Italy, and the UK. The truck-side ads that were deployed offer a number to text that could answer any questions that people may have about the pandemic and ways to reduce the spread of the virus. This was a massive production, especially considering the organizations involved are debatably the most trusted and important in the world.

One of the most popular examples of truck advertising is Coca-Cola, a brand well-known due to its great work with all kinds of ads. But this time we are going to focus on truck advertising and the company’s famous red truck full of lights used especially in decembrine times.

W.B. Doner, an advertising agency, created the Coca-Cola truck campaign in 1995. During the Christmas season, the first trucks were a 2-tonne and 40-foot truck loaded with over 30,000 lightbulbs that traveled through valleys, towns, and hillsides.

After three years Coca-Cola maximized the visibility of the company and truck with the famous “Christmas Caravan III” which was televised to more than 100 countries and reached millions of views.

During the Christmas season, Coca-Cola focused its truck advertisement on that, a  time for families to get together and spend time around each other. Coca-Cola managed to combine its brand with a celebration ( Christmas) through its trucks with the help of its eye-catching and emotional advertising campaigns.

Coca-Cola did not create a one-time advertisement or truck campaign, it is 80% familiar and 20% new. So, they produced those ads and campaigns constantly (every Christmas time) in order to set their brand in our heads and relate it with Christmas, family, and happiness.

Knix, a Toronto-based intimates company, customized a trash bin truck in New York with a banner encouraging women to “stop trashing their periods,” drawing attention to the 6 billion tampons that end up in landfills each year. The campaign visited several city sights, including Times Square, Grand Central Terminal, and the Brooklyn Bridge, knowing that just Time Square is visited by 40.000 people daily.

To keep ahead of the environmentally friendly consumer trend, the OOH ad used a garbage truck as an allegory for female hygiene waste. Simultaneously with Women’s Equality Day (Aug. 26 2020) this campaign increased brand awareness between environmentally conscious consumers buy launching by focusing on sustainability and tidying up to the launch of its Super Leak Proof Underwear.

Also additionally to the OOH ad a 30-second national tv commercial accompanied the campaign, where there is a comparison to the complexities of a toxic relationship to tampon life, encouraging viewers to “break up with disposables.”, which was promoted in all popular social media platforms, including Twitter and Instagram.

With the help of Movia this Knix ad was capable of creating a remarkably original and memorable campaign that boomed online and exceeded the KPI expectations, showing the creativity and talent of truck-side advertising and of course, Movia’s innovative thinking,

During pandemic advertisers had to be especially inventive in capturing the consumers ’ attention, whether they were walking along the street, driving their cars, or sitting in their homes and that is what Corona did with its truck ads after the comments in one of its social media campaign.

Corona Seltzer make one of the most creative ads in the medium. The advertisement was not only incredibly bright, playful, styled, and thirst-quenching, but it also included real-life bubbles.

With a white back, bubbles and bright colors mixed with a fresh blue  Corona Seltzer makes a great impression outdoors, catching the attention of all ages.  Adding a bubble machine to the trucks to make it looks like the seltzers on the truck were producing real-life bubbles was the cherry on the pie to maximize this campaign. The truck-side ad campaign was a huge success, generating a lot of buzz both on the streets and online.  As we keep motion, adding a little extra something to a campaign can make it a huge success and increase engagement tenfold or tear it apart. Remember!  Timing, creativity and knowing your target are the keys to a successful ad campaign.

Global Industrial is a major leader in the material handling and maintenance solution sectors, as they went to Movia looking to strengthen and optimize their brand. In a 14 week span, five trucks went around the Orlando area generating an eye-watering 24.6 million impressions at a CPM of $1.28. 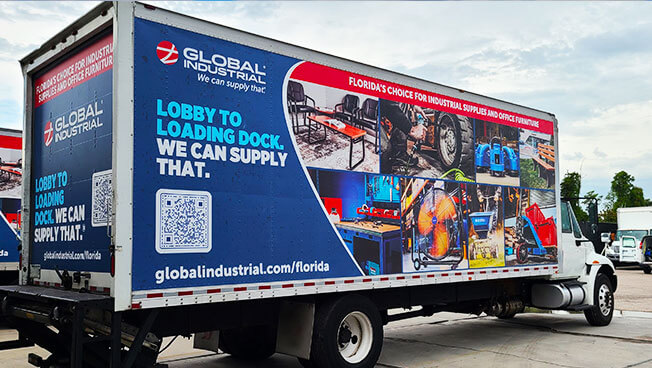 Following some retargeting, they were able to amass just over 1.3 million online impressions for their site, which led to an 86% increase in their online click-through-rates while also seeing an 11% growth presence in Orlando following their successful campaign.

This campaign’s success mirrors the likes of Johnson and Starr mentioned above, especially seeing a nearly 90% increase to their site’s click-through-rates, is frankly almost unheard in many cases, but similar to the Johnson and Starr campaign, this type of success would only have been produced with the help of a mobile billboard truck.

Corus Entertainment Inc. is one of the most trusted names in Canadian Media. Founded in 1999 as a spinoff from Shaw Communications it has distinguished footholds in radio, publishing, television industries. Corus owns the national Global Television Network, 39 radio stations, and a portfolio of 33 specialty television services. Corus also plays a dominant role in Canada’s children’s television industry, owning YTV, Teletoon, Treehouse TV networks, just to name a few.

Across 7 weeks in both Toronto and Calgary, a fleet of 22 billboard trucks were sent around the cities to promote two new shows under the Global Television Network brand, The Equalizer and Clarice and as a result generated 45+ million impressions during the span of the campaign, of which 32% of those remembered seeing the advertisement unaided, and of that 52% said they watched 2 or more episodes of the programs.

To sum up, it is clear by the examples above, and for the many others that were not included,  the truck advertising industry basically did what it needed to do providing ads that excite customers, encourage hope, create engagement, and with lots of creativity. If we look to the future of ad campaigns, truck-side advertisements will remain successful in this manner. Due to, It being an OOH format capable of transcending “borders” and adapting to whatever the future may hold, it already beat a pandemic phase.  It will be fascinating to see how advertisers create new truck-side advertisements in the coming years. Are you excited about that? what do you think it’s next?